September's Students of the Month 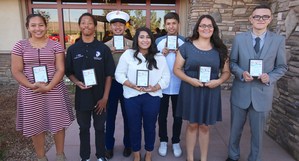 Five students from Hemet Unified School District were recognized as Students of the Month.

Sponsors of the Student of the Month Program donated backpacks filled with gifts, gift certificates, a plaque, and much more. The students had an opportunity to thank their families and teachers who have supported them and helped them plan their future life goals.

Jordan Cunningham was nominated by Al Fernandes, her teacher at Hemet High School, for being a quiet and persistent leader. Jordan is involved in a variety of clubs and organizations on campus. She currently has a 4.2 grade point average (GPA), is a member of the Varsity Girls’ Softball team, and a safety representative for the school’s Safety Committee for 2016-17. Jordan feels that no matter what circumstance she is faced with; she will be able to overcome it due to the effort she puts in. After high school she plans to attend college and major in kinesiology. Mr. Fernandes said, “She is a shining star at Hemet.”

Monique Biantes was chosen as West Valley High School’s Student of the Month. Rod Martel, Monique’s Multimedia teacher, said he is impressed with her ability to balance the rigor of her class schedule, sports, community service, homework, and the responsibilities she has at home. Among having perfect attendance and being in the top 10% of her class, Monique helps her single mother raise her three younger sisters. She said she wants to be an example for them. She is currently taking four Advanced Placement classes, is the co-captain of West Valley’s girls golf team, and still finds time to help her fellow students. After high school, Monique would like to attend college to get her degree in business.

Ernesto Calumpang was nominated by his ROTC instructor, Major Antonio Williams, as Tahquitz High School’s Student of the Month. Major Williams described Ernesto as a smart and amazing young man. He is currently the commanding officer of the ROTC program and wants to ensure he sets the best example he can to the nearly 170 other students in the program. Ernesto said leadership is the biggest contribution you can give. He is a firm believer in working hard for what you want. He often stays up until one in the morning studying for his various classes. Major Williams overheard Ernesto describing to his fellow classmates that he was no smarter than them, but chose to put more of a priority on the things that are important to him in life. He wants to attend college and major in biology to become a surgeon.

Miguel Barajas was selected by Julie Cope, one of his senior class advisor and a teacher at Hamilton High School. Mrs. Cope nominated Miguel for his respectful attitude and his high work ethic. Miguel is the senior class President and takes the role very seriously. He feels responsible that all seniors have a year to remember. He has worked tirelessly over the summer to set up a variety of fundraisers to ensure his student body has a wonderful year. Miguel is involved in a variety of clubs on campus, is the school’s representative to the Governing Board, and enjoys community service. After attending college, he hopes to become an orthodontist.

Ryan Wilson was nominated by Felice Hill, as ACE Academy’s Student of the Month. Ryan was unanimously chosen by staff members due to his commitment to achieving success despite adversity. Mrs. Hill is amazed by his dedication to graduate high school. He is determined to attend school each day, even when transportation is difficult, attend extra class sessions and summer school, as well as using all of his class time efficiently. Since attending he has made up over 100 credits. Ryan is currently enrolled in the Career Technical Education program for Criminal Justice and the Hemet Police Explorers program. “I am excited to see what this young man does in the future,” said Hill.

Congratulations to the students, teachers, principals, and family members. It was an inspiring morning celebrating these students and their bright futures.